Music is there for every occasion. It celebrates joyous events, brings us through mourning, calms us during crises, soothes us to sleep and provides entertainment.

In some of the harshest situations, e.g. the Titanic sinking, attempts are made through music to ease fears, as their band picked up their instruments and played as the ship went down.

While it provides so much emotionally, it can also be harmful physically. The noise that it produces at concerts and other venues is harsh and creates damage.  Over time, that cumulative deterioration can result in permanent hearing loss.

That can be prevented, though, and not by avoiding music. It just takes wearing the proper protection which would be musician earplugs. Two earplugs that we’re going to talk about and compare are Etymotic vs Earpeace. 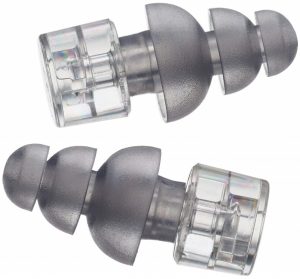 These plugs are actually used by those performing in front of crowds.  They come with a hard, plastic keychain case, neck cord, one pair of silicone, three flange eartips and one pair of foam tips.  They have a hole for the sound to filter through. They don’t come with filters. They should fit tight and seal without protruding. There is no stem with the ER20XS just a small tab to pull the piece out. They come in  a regular and a larger size. The standard is suitable for most canals. You can wash them with a clean, damp cloth. Don’t immerse them in water. If you use them a lot, they can wear out over time and break. It’s recommended to replace them about every four or five months.

The way they work is they diminish sound. They don’t cancel noise. So, loud music will be made to sound as if it’s just been turned down to a more bearable tone.

The biggest complaints with the Etymotic were comfort and the NRR rating. Some thought the rating was generous and a few felt the plugs were not comfortable after wearing them for a length of time.  Overall, they felt the sound quality was good, an audiologist recommended them and they were said to be durable effective and comfortable. A good deal for the price. 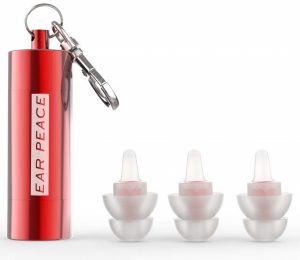 This earplug is made of hypoallergenic silicone. It’s hospital-grade material.  It comes with an aluminum, screw-cap keychain case, three plugs and three filters for higher, lo er and median sounds.  These can be immersed in warm, soapy water to clean. There is no set length of time recommended to replace them. When they show signs of wear, you may want to replace them. Once they’re in your ear, there is a small tab to pull them out.  No particular sizes available. Stretch to fit most ears. The manufacturer will be releasing Earpeace Petite very soon to accommodate small canals. After placing these plugs , you don’t realize you’re wearing them with the comfort factor. They are virtually invisible with the skin tone coloring. As with the Etymotic, sound is not completely canceled, it is just reduced to a more tolerable level.

One complaint with these was the sound quality. They felt it was muffled. Overall, people were happy with the Earpeace.  They found them comfortable, liked the compactness, were able to speak with friends while enjoying a concert, and some were going to buy several to have on hand.  They said there were none as good.

In general, there is probably a love-hate relationship with earplugs. You know you have to have them. They’re doing you a service to your health.

The fears, though, are that you’re going to lose the sound quality.  You’ll be experiencing discomfort or even pain, so the joy of what you’re listening to will be lost.  Bigger than even that, you’re afraid you’ll look like an alien with these things protruding out of your ears in who knows what colors.

Well, luckily for you the two we just looked at can squash your fears.  The Earpeace HD vs Etymotic gives you the option to choose between two really great products that enhance sound.

They are made with materials that allow wearing them for long periods of time without realizing you’re wearing anything at all.  Both of them get deep into the canal so there is a low profile.

How do you know which one is right for you?  For the most, that’s a personal preference through doing research, trying them out, seeing how they feel, sound.  But, some of the work has been done for you. Let’s look.

When looking at the chart there’s a lot of similarities. The cost wasn’t included but it was the same on Amazon at $24.95 for both sets. But there are also some things that make a huge difference at give one of the plugs a slight edge.

Earpeace is said to translate the sound in a muffled or almost muddied fashion. Etymotic is clear.  Makes you wonder if that filter is really necessary?

A few other things that stood out for the Etymotic, it is a plug chosen by professionals. That’s the best reference or testimonial a product can have.

It was ranked number one on the top ten for musicians for sets.  These have to go through heavy review boards to make these lists, so again, plus for the Etymotic.

The only real issue is comfort. Earpeace seems to have the market on comfort. Though, there’s been favorable remarks on comfort for Etymotic, the winner there is Earpeace musician earplugs.

Overall having to go and buy a set based on the findings here, it would have to be Etymotic musician earplugs hands down.

Doing these experiments is a nice way to figure out which way to go when you’re buying a product important to your health. Your hearing is one of the most important things about you, so you need the best possible protection. Even if it’s only the best by one or two points on a scale. It’s that much more safety for your eardrum.

Noone wants to be unable to hear the music because we let our hearing go. It’s a source of happiness, comfort, peace and will be our entire lives.

Music is known to calm the effects of Alzheimer’s in patients. It makes some folks want to move in nursing homes. Some doctors dance for their kids in  pediatric practices to make them feel better.

Protect your ears so your band can play on.

See Earplugs For All Uses: